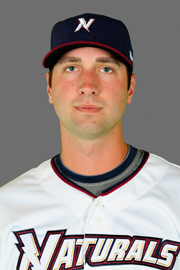 Greg was selected in the 28th round out of high school of the 2008 draft. He had a couple of great seasons as a pitcher on three different rookie league teams. Then, in 2011 on the Kane County Cougers (A Team), he blossomed with an absurd 1.93 ERA, 119 strikeouts to 25 walks, and HR/9 of 0.4. His SO/9 rate dropped a bit from 2010, but all his other metrics look strong for the pitcher many consider to have had the best control in the Royals organization.

Greg was a professional for 4 years. Greg also credits his improvement in 2011 to “a few mechanical changes and a lot of little tweaks,” made under the watchful eye and guidance of Cougars pitching coach Jim Brower.